Any building could be the target of a terrorist or criminal attack, and most building owners take some precautions to prevent these events and mitigate their effects if they do occur. Some fundamental precautions include installing secure locks and video surveillance systems.

Some types of buildings, such as government buildings, transportation hubs and power plants, are more likely to be the target of severe attacks. Adequately protecting these structures requires more extensive measures, such as installing blast shields and blast walls.

Various target hardening measures protect against potential attacks. Learn more about what building hardening is and some mitigation techniques below.

What Is Target Hardening?

Target hardening is the practice of taking steps to make a building or other structure a more difficult or less attractive target for terrorists, criminals and other potential attackers. It can involve a wide range of protective measures, from installing secure locks to installing blast shields to considerations for the design of the building itself. Various types of structures used for disparate purposes require different levels of target hardening.

In the event of an attack, target hardening can reduce the occurrence and severity of injuries and loss of life. It can also minimize damage to the building and other assets. Target hardening may also reduce the likelihood of an incident occurring by making it harder to carry out an attack.

When Is Building Hardening Necessary?

All buildings require some sort of protection against potential attacks and other criminal activity, but specific types of structures make more attractive targets for terrorists and criminals. Terrorists typically select targets on which an attack is likely to inflict severe economic, emotional or societal damage. Those that play a central role in an economy, government, society or culture are at a higher risk. Structures large numbers of people visit are also at a higher risk. Criminals may target buildings that contain items of significant value in an attempt to steal those items.

What is a hardened building? Some examples of potential targets include:

A wide range of techniques can harden structures against potential attacks. Target hardening is far from a one-size-fits-all process. Proper hardening requires an analysis of threats and vulnerabilities. The results of this analysis help you determine what target hardening techniques to use. For some types of buildings, such as government buildings, standards are also in place that layout requirements for structure hardening based on building type and use.

The Federal Emergency Management Agency describes four steps for conducting an assessment of risks and determining the appropriate target hardening techniques to protect a building as part of counterterrorism efforts.

There are many different mitigation techniques for target hardening buildings. Below are a few of the most essential, with a focus on explosive threats.

Screening procedures are a crucial aspect of many target hardening strategies. This preventive measure can keep people from carrying explosives and weapons into the building, potentially causing significant damage, injuries and loss of life. Bombs can be small enough that perpetrators can carry them by hand, conceal them in vehicles or place them in a small package. Because of these threats, it's essential to have screening stations at every entrance to the site perimeter and building, including pedestrian entryways, loading docks, parking lots and mailrooms.

There are situations in which screening stations are not effective, such as attacks in which a perpetrator uses a vehicle to ram through gates or buildings. Intruders may also try to sneak into a building through windows or other unofficial entrances or attempt to break in after hours. Other perimeter security measures are necessary to prevent these types of attacks.

One crucial consideration is the distance required to prevent explosives from coming within range of the building. Considering the risk level for the building and the type of attacks that may occur can help determine the correct distance. Of course, further distances are always safer.

At this perimeter, you can place various kinds of physical barriers such as fences, gates, bollards, walls and wedge barriers. These barriers must be able to withstand the force of a vehicle trying to ram through them. You can also install detection technologies such as security camera systems, motion detectors and systems that will send an alert if someone crosses a specific line on the site property.

To prevent intruders from sneaking into or breaking into the building, you need adequate lighting and secure locks on all doors, windows and other entrances. Detection systems, such as video surveillance systems with motion detectors, placed in the building, on the property and at the perimeter are also essential.

Mitigating the Effects of Potential Explosions

There is always the potential that screening procedures, perimeter barriers, security systems and other measures aimed at keeping threats off the site and out of the building will fail. Even if this is unlikely, it's essential to take steps to mitigate the impacts of such an incident. The physical elements of the building, including its design and the materials used to construct it, can help mitigate the impact of an explosion.

Specific materials used for windows have superior strength that enables them to resist blast loads. The design of these materials also minimizes the risk of shattering and becoming dangerous airborne debris if they do break due to an explosion. Glass laminate products, glazing materials and anti-shatter films can be helpful for this purpose.

Applying fiber-reinforced polymers made with carbon or dry aramid fibers to the surface of existing concrete walls, slabs, beams and columns may provide improved blast protection.

Another essential protective measure against explosions is the use of blast walls and shields. These products, made with woven steel cables, can contain blast debris, are fireproof and reduce the peak pressure of a blast, reducing and potentially neutralizing its effects. They also allow for venting of gas and dust. These shields can attach to walls or drape over supports in either a permanent or temporary installation.

You can also install a covered tunnel made with this same blast-resistant, woven steel cable construction to create a protected, enclosed area to screen visitors before they enter a building or site.

A localized failure due to an explosion may cause other parts of the building to become overloaded and fail as well, especially if you don't take precautions to prevent this. This process is called progressive collapse. In addition to causing further damage to the building, progressive collapse results in large amounts of heavy, falling debris that may cause injury or death.

Some structural systems are more vulnerable to this phenomenon than others, so you can consider this risk during the building design phase. With the right design, a building can lose one or several of its exterior columns without a progression of collapse. You can more easily include this kind of structural system in new hardened buildings than in existing buildings, but it may also be possible to retrofit a building to improve its resistance to progressive collapse.

Another approach is to reinforce columns, increase their size or protect them with blast shields to prevent them from becoming damaged. Covering concrete columns with steel plates or composite materials, or encasing steel columns in concrete to add mass, may help protect them in the event of an explosion.

Transfer girders, which transfer column loads to the surrounding columns, are especially vulnerable to damage due to explosions. The collapse of a transfer girder may leave several other columns unsupported, potentially leading to progressive collapse. To reduce this risk, the design of transfer girders should be continuous over several supports and reinforced to prevent damage. 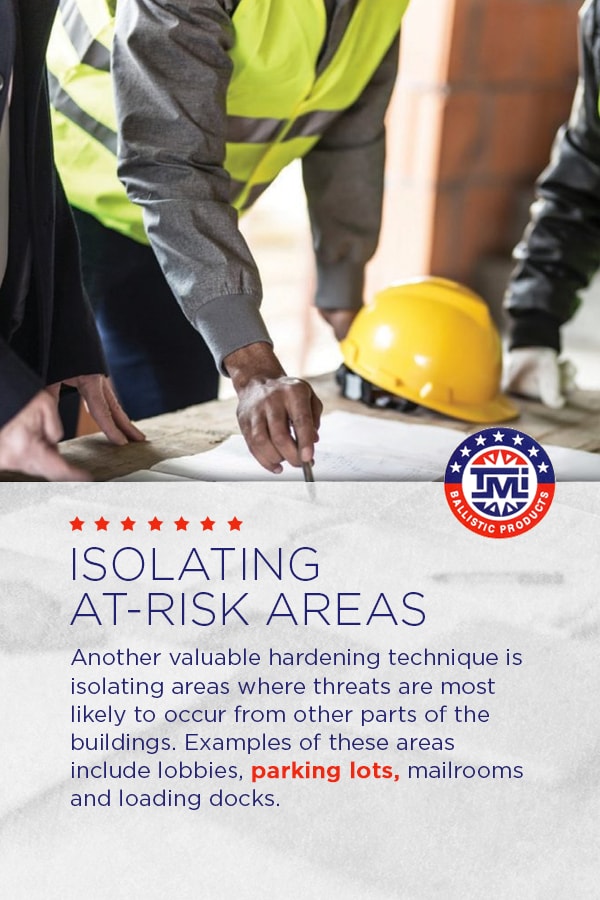 Another valuable hardening technique is isolating areas where threats are most likely to occur from other parts of the buildings. Examples of these areas include lobbies, parking lots, mailrooms and loading docks. The lobby or parking lot may be the first area someone accesses, potentially before screening occurs. Packages may also enter mailrooms or loading docks before getting screened.

These areas require hardening so that if an explosion occurs in one of them, it's possible to contain the explosive shock wave and any debris, and the gas pressures that result can vent into the atmosphere. This technology can prevent the explosion from causing damage to the main part of the building and harming the people inside. Reinforced concrete walls, reinforced columns, blast walls, blast shields and blast tunnels can help harden these areas and isolate threats.

If nonstructural building components, such as piping, lighting fixtures and ducts, become damaged in an explosion, they may fall and cause further damage or injury. Damage to these components may also result in the loss of crucial services, such as lighting or water for sprinkler systems, potentially making the situation more dangerous. To prevent these problems, tie these components to ceiling slabs using secure restraints or located below raised floors. If there is an on-site generator, it may also be necessary to place it in a protected, hardened location to prevent loss of power and further damage due to fuel combustion and other risks.

Numerous codes and standards exist related to designing buildings to mitigate explosive threats, with federal guidelines being the main source. These standards and codes can be useful, and following them is a requirement in some cases. However, it's critical to remember that each structure has unique prerequisites. Some of the federal agencies that provide guidelines related to blast mitigation, security and building hardening include:

Certain kinds of buildings and structures are more likely to be the targets of attacks. To prevent injury and loss of life, economic damage and other severe consequences, hardening these critical structures is crucial. It's essential to design the building and add elements such as reinforcements and blast shields to mitigate the effects of blasts and other threats. Perimeter security, screening processes, threat detection systems and other measures are also vital. A thorough analysis of threats and vulnerabilities can help determine the proper mitigation techniques to use.

At TM International, we provide blast shields, blast walls and SafePass blast tunnels that can help harden a building and protect against the effects of explosions. We construct our blast shields and walls with 5/8" galvanized wire rope, yet they are lightweight and simple to transport and install. They have the following capabilities:

We test all our products thoroughly to ensure quality and effectiveness and have experience working with numerous industries. To learn more about our blast shields and walls and how to use them for building hardening, contact us today.